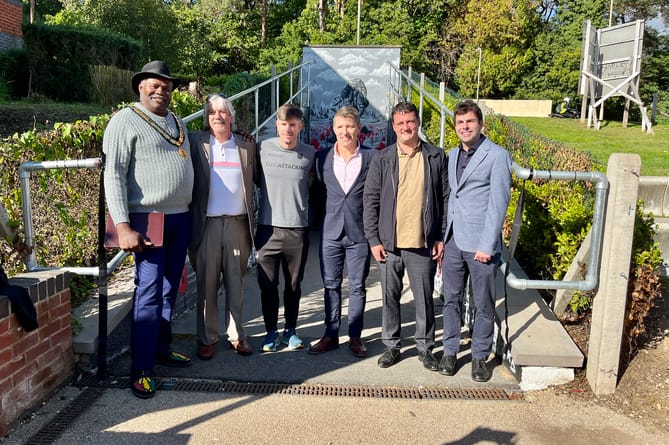 Review: The weird and frightening world of Neil Gaimen comes to The New Victoria

Brian, of Whitehill, completed 25 marathons in 25 days, running a mile for each member of the British armed forces killed in Afghanistan and Iraq to raise £168,060 for forces charity Walking With The Wounded.

The mural, called Woody’s Walk, is on three walls of the subway opposite Café 1759 in Bordon and was commissioned in recognition of what Brian’s achievements mean to his family, friends and residents of the town.

Whitehill town councillor Mike Steevens was approached with the idea for a mural by resident Karsten Waller. In conjunction with local artist Ryan Brudenell they came up with a design plan which Ryan created and painted.

The mural was kept secret from Brian until the unveiling yesterday (Wednesday) that was also attended by town mayor Cllr Leeroy Scott and town council leader Cllr Andy Tree.

Brian, who earned the Military Cross at the Battle of Danny Boy by leading the British Army’s first bayonet charge in 25 years, said: “For me it’s just a real honour. I never expected such a tribute – I don’t think I deserve it, to be honest – and coming out and seeing so many members of the community, it’s just overwhelming. But I’m very humbled and have so much gratitude and can only say thank you.”